The Three Little Aliens and the Big Bad Robot 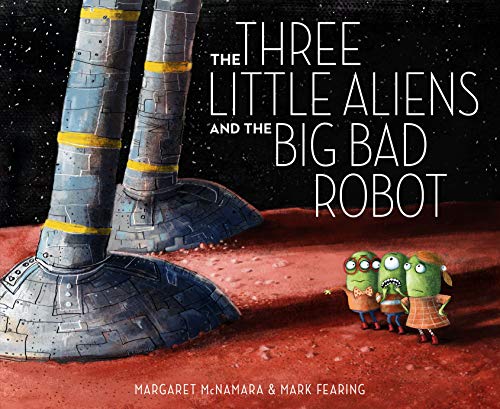 “Then I’ll Crack and Smack and Whack Your House Down!”

When Mama Alien’s house was getting a bit crowded, and her three kids were getting a bit bigger, she decides it’s time for them to move out. She warns them to watch out for the BIG BAD ROBOT and to make sure they stay together. You can only guess what happens next in this re-telling of the fairy tale “The Three Little Pigs and the Big Bad Wolf”!

I love the idea of this story because I really like The Three Little Pigs tale and I think this one is a much funnier version! I think it is really cool how Ms. McNamara took a well-known fairy tale and told it in such a unique way. I really liked the illustrations too. They are detailed and they add a lot to the story. I read in the book that Mr. Fearing researched about the planets in our solar system (the aliens start out on Mercury and end up on Neptune). He wanted the illustrations of the planets in the book to look similar to how the planets really look. I think that’s pretty cool. The three little aliens (Bork, Gork and Nklxwcyz) are also pretty cute…see?