If you didn’t hear it before, I LOVE COMICS! I think comics are a great way to get some kids to read! Today I have TWO cool Graphic Novels to tell you about! 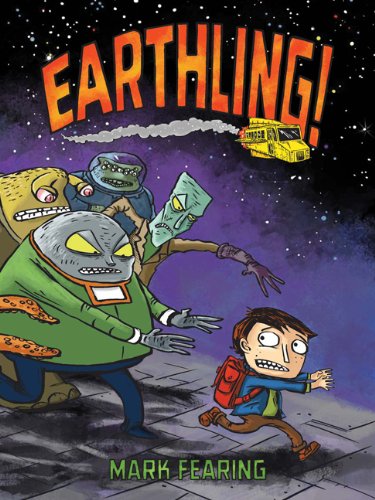 Written AND Illustrated by:  Mark Fearing

Bud got on the wrong bus. Not a big deal right? Right. That is, if that bus doesn’t go into deep space to a school that is full of aliens that hate Earthlings! Bud got on that kind of bus.

The kind with the aliens. He meets Gort McGortgort, another kid/an alien, who becomes his guide. Gort tells Bud that he can’t tell ANYONE he is an Earthling because Earthlings are feared and despised (apparently all the aliens think Earthlings want to kidnap them).

Gort and Bud become friends even though Bud is an Earthling. Gort does his best to get Bud home, but bad (and somehow completely funny) things keep happening! Will Bud ever get home?

I have been waiting and waiting for this book to come out! I first read about it on Mr. Fearing’s blog, (click HERE). I really like Mr. Fearing’s illustrations and was happy to find out he was writing a graphic novel.

I was not disappointed! I really did “laugh out loud” when reading this book! It was really likeable and hilarious! I really liked Bud and Gort. They were both good friends, nice and cool. I thought the plot was hysterical – Earthlings being feared and an Earth boy being trapped as the “new kid” in school.

Mr. Fearing’s illustrations and story really make this an awesome graphic novel. I thought ”Earthling!” did really well as a graphic novel because it was cool to see how all the aliens looked and the pictures really added to the whole story.

I recommend this graphic novel to kids 8+ and young advanced readers because it is a longer graphic novel that actually has a good, long story that you can really get into. 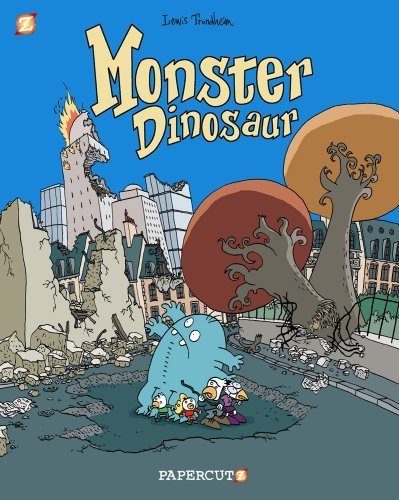 Written AND Illustrated by: Lewis Trondheim

The Monster comics are based on this –

“Petey and Jean love to draw pictures of monsters. One day they draw a scary monster that comes alive – it escapes right off the paper and disappears into their home.

Well, they certainly have to do something about that so they drew a nice monster, with three legs, four arms, and ten mouths to eat the bad monster. The plan works and Petey and Jean decide to keep the nice monster as a pet… and they name it Kriss.”

In Monster Dinosaur, Petey and Jean want to join a drawing contest where you have to draw a dinosaur and bring it to life with “the shiny powder” and it fights another dinosaur in the contest.

The kids draw a dinosaur and enter it, while their dad enters his own dino. Somehow, Kriss, gets into the fight instead of their dino! Kriss is having fun beating all the dinos but the competition starts to get rough.

Luckily, Kriss gets disqualified because he runs out of the arena! Jean and Petey’s Dad’s dinosaur, Mortalosaurus wins the tournament but then goes on a rampage destroying everything in its path! Now it’s up to Petey, Jean, their Dad… and Kriss to stop Mortalosaurus!

Earthling! by Mark Fearing AND Monster Dinosaur by Lewis Trondheim - Our Review

This is the third book in the “Monster” series. I thought this book was really cute and very funny.  I thought Kriss really rocks, he’s a cool monster.

I really liked the part of the book where Petey and Jean’s Dad shows how he drew his dino. I thought the format of the book was unique. The characters don’t really have talking bubbles and aren’t saying things, the story is told as captions underneath the pictures told from the kid’s perspective. This is definitely a comic a lot of kids (boys and girls) will like!

5 out of 5 bookworms for Monster Dinosaur!