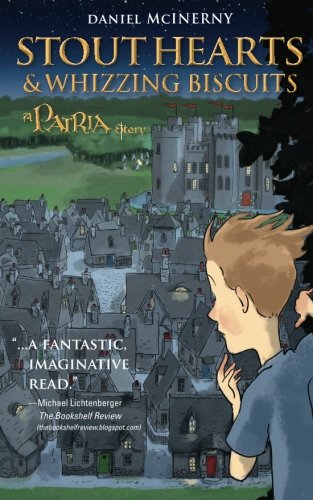 When Oliver Stoop was riding a lawn mower, he accidentally drove into the Kingdom of Patria (unknown to Oliver, a regular American kid, there is a secret, hidden country called Patria smack in the middle of the USA). While he is there, he finds out that the land that his father is going to build a house on belongs to Patria. Sir Hector, the general of the army in Patria, declares war on Mr. Stoop (Oliver’s father). Oliver tries to convince both sides that they don’t need to go to war, but his dad and Sir Hector both won’t listen! Oliver realizes that the only way to stop this war is to find the long-lost treaty between the US and Patria. With the help of his new friends Farnsworth and Rose, Oliver goes to find the treaty before it is too late.

This book seriously made me laugh out loud! It is full of something for everyone – jokes, puns, sarcasm, action and much more! It also has some mystery, action and excitement in it! I loved this book! It has all the things I like! Even the title was great! I really like Oliver’s cleverness, Rose’s smartness, and Farnsworth’s ability to act without hesitating (unless if it could badly hurt him!)! I like the cover a lot. I also like how the author describes Oliver’s hair –

“…With a head of brown hair that perpetually looked like it had been hanging out the window of a car going ninety miles per hour.”

I recommend this awesome book to kids 8+.