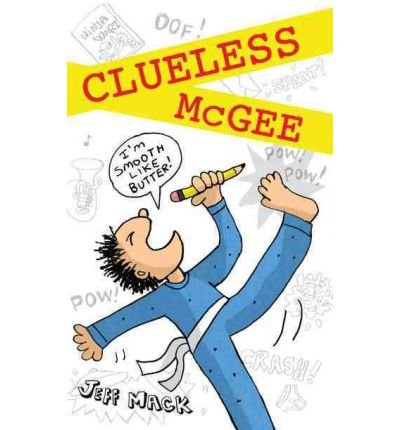 PJ McGee thinks he’s a detective, ninja and a spy just like his dad…only he’s not.

In fact, PJ is kind of a disaster, but that doesn’t stop him from trying to solve the mystery of the stolen Mac’n’Cheese!

The school’s most favorite lunch is missing and PJ decides he (along with his friend Dante) is the guy to find out who did it!

After searching for clues, and making a few mistakes… OK, not a few, he pretty much messed everything up.

PJ is sure he knows who stole the Mac’n’Cheese,  but then that person hired him to clear his name. Is PJ wrong?

Probably. After annoying the entire school and getting into all sorts of trouble, PJ is still clueless!

This was a VERY funny book. It was a quick read but it was enjoyable.

There wasn’t any message or lesson to the story, it was just fun. The illustrations that Mr. Mack created really made the story.

PJ was a very funny character I liked how he was so…clueless. I thought that how the story was told was very unique.

PJ tells the story through letters he writes to his dad. PJ thinks his dad is on some super secret spy mission only the reader doesn’t know where he really is.

I wonder if we will find out in the next book.  Fans of Big Nate and the Wimpy Kid series will really like this book. I also think kids 8+ would like this book!

Four out of Five bookworms for Clueless McGee!

Four out of Five bookworms for Clueless McGee!

To learn more about Mr. Mack and his books, click HERE.