Whoever Heard of a Fird? By Othello Bach

Published by CreateSpace on October 6, 2012 (re-release of the book that was originally published in 1984).

Fird isn’t sure if he is firding right. You see, Fird is part fish, part bird, but no one has ever heard of a Fird, so they can’t help him (Fird was raised by a nest of Dickens (part dog, part chicken).

Fird and his friend, Snyder Spider, set off to find a herd of Fird. They meet a lot of two feature creatures (like Shamels (part sheep, part camel),  Hyenants (part hyena, part ant) and Girouses (part giraffe, part mouse) but no Firds.

Fird and Snyder travel far and wide on their journey to figure out how to fird correctly. They run into some friendly and some not so friendly two-feature creatures.

Fird never gives up hope and one day he sees another Fird (part fish, part bird), but even though this Fird looks just like him the creature claims to be a Bish (part bird, part fish).

The Bish tells Fird he’s a Bish too and Bishes really don’t do anything but bunch in bushes. Fird is not happy he is a Bish. Fird likes to sing and dance. He doesn’t want to just bunch in a bush,  but it seems that is what he is supposed to do. Will Fird ever figure out who he really is?

Whoever Heard of a Fird?
By Othello Bach 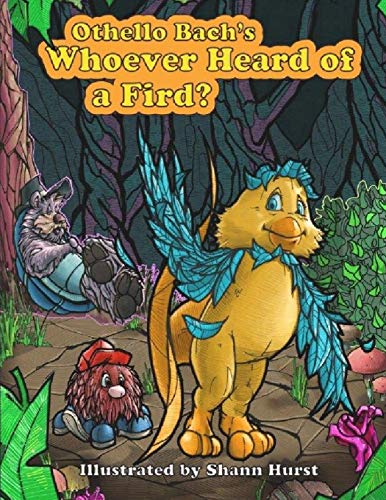 Published by: Simon & Schuster Books for Young Readers on October 1, 2004

Opening and Synopsis- Opening – “Do YOU have a hat? Something fuzzy, warm, and red, to keep the snowflakes off your head?“

Synopsis – From Inside cover:

A hat for keeping off the rain.

A glowing hat. A hat with fruit.

A hat for that new dress or suit.

All herein have hats, it’s true —

Whoever Heard of a Fird? - Our Review

This book had a great message. After all that searching Fird finds out he already is who he is supposed to be and already acts the way he is supposed to act because he is himself and doesn’t need a herd to tell him what to be.

The story is well written and is fun to read. There are a lot of words in the book and some harder words so I think it would have to be a read aloud for young kids.

There is an audio book version of the book that my sister and I enjoyed listening to. The story has songs in it and on the CD they are sung by all the different characters, which is nice. The plot of the story was very unique (like all the different animal combinations).

The illustrations were very detailed and it was nice how even the background colors changed from page to page. The two feature creature illustrations were cool (but I did find a couple a bit creepy, like the Snooze, but he was supposed to be creepy).

Five out of five bookworms for “Whoever Heard of a Fird?”!fivebooks

I first heard of a fird… ERR I mean this book on Sue Morris’ blog – Kid Lit Reviews. Check out her review HERE!

Check out the trailer!