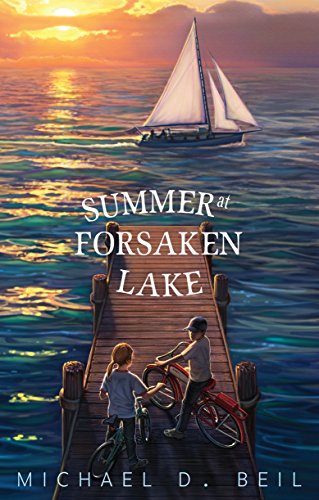 Published by: Knopf Books for Young Readers on June 12, 2012

Summer at Forsaken Lake - Our Review

Nicholas is not looking forward to spending the summer with his twin sisters, Haley and Hetty at his Uncle Nick’s house at Forsaken Lake. Nick’s Dad is a doctor and he is going to Africa to help out people who need it in the Doctors Without Borders program. Things start to get interesting when Nick finds a secret compartment in his Uncle’s house. The compartment is filled with stuff from Nick’s dad. One of the things in the compartment is a movie made by Nick’s father. The movie is about the legendary Seaweed Strangler at Forsaken lake, but it was never finished. Nick and his new friend, Charlie (a kind of tomboyish girl) set out to discovery the mystery behind the movie, the Seaweed Strangler and some old family secrets that they never knew about!

This book had it all – mystery, adventure, excitement, friendship, a great setting, a Seaweed Strangler, great characters, alien robots… OK it didn’t have alien robots, but it did have all the other stuff. The story was written well. It kept me turning the pages. I think I should tell you that even though it has the Seaweed Strangler movie in the book, it is not a horror book, there is no violence (except during a kid-made movie, but that’s not over-the-top violence) and no cursing at all. Mr. Beil wrote a great mystery that kids of all ages can read! The sketchy illustrations throughout the book really went nicely with the story. I highly recommend this book!

Five out of five bookworms for “Summer at Forsaken Lake”!

I heard Mr. Beil give a talk about writing mysteries at the Kid Lit Festival in Lititz Pennsylvania last year. In his talk, he explained what makes a good mystery and how to be a good detective. The talk was very interesting. He also showed us a movie he made with his brother when they were kids.

It was called “The Seaweed Strangler”! He said it is where he got the idea for his book. I thought it was pretty cool that he made a book out of something he did when he was a kid. You can see the movie on Mr. Beil’s website (click HERE).

To learn more about Mr. Beil and his other books (including The Red Blazer Girls), please visit his website by clicking HERE.