Chase Tinker & The House of Magic By Malia Ann Haberman 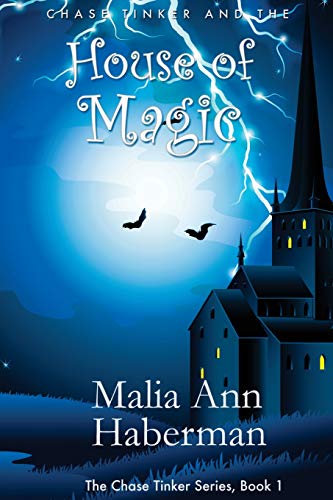 Things have been pretty crazy since Chase’s dad went missing a year ago. To make things worse, Chase Tinker doesn’t know why he and his brother have strange powers.

Chase can move objects with his mind, and Andy can make objects stop moving or make them freeze in time. When their supposedly dead grandfather suddenly appears, the boys are a bit confused (as you can imagine).

Their grandfather asks the boys to spend the summer with him so that they can learn to control their powers. Chase learns that the members of the Tinker family have magic powers given to them by a special Relic that is in the attic of his grandfather’s house.

Things go from strange to worse because Chase also learns there is someone/thing out to steal the relic and the Tinker magic!

This was an awesome story! The action was exciting. The story idea is fun. I really liked the description of the Tinker house (the house the boys go to stay with their grandfather in).

Ms. Haberman’s writing style is great for middle-grade and young advanced readers. I thought Chase was a great main character, and I enjoyed reading about him. The story was a quick read for me and I liked it so much, I would have liked the story to be a bit longer.

I would have loved to know more about the Tinker house and the Marlowe family (the bad guys). This is only because I liked it so much, not because the story wasn’t told all the way. There was one instance of “What the h***”?” which in a book meant for young kids, it shouldn’t be there.

I went back and forth between four and five bookworms on this one (I don’t do halves – that would just be mean to cut a worm in half – which is just mean and you also cut the book in half).

For my reading level, I want more in the story but I think it’s a five bookworm book for the age it is written for. So five it is!

To learn more about Ms. Haberman, please visit her website by clicking HERE.