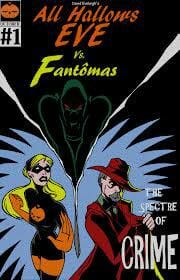 All Hallows Eve Vs. Fantômas Book I: The Spectre Of Crime

All Hallows Eve is a comic book super-heroine that I love reading about (check out my review of All Hallows Eve HERE and All Hallows Eve Face the Music HERE).  The books in the Fantômas series are written like a serial adventure, so you have to wait for the next book to continue the story. The books are actually novellas, not typical comic books, but they are packed with lots of comic book action. I am reviewing the first two in the series because that’s all there is so far.

In All Hallows Eve Vs. Fantômas: The Spectre of Crime, Eve was being attacked by a tough voodoo doll-like villain named Zepingles, only to learn it was a diversion after she defeated it. When Eve got to the scene of the true-crime she finds out that the evil Fantômas has attacked Professor Steiner to get blueprints for a special machine that Fantômas wants for evil purposes. Fantômas is the legendary super-villain who always wins. Eve has never been up against such a powerful enemy!

**Just a cool note – the character Fantômas was a very popular French comic book supervillain from back in the early 1900s and Mr. Eveleigh brought him back. 🙂 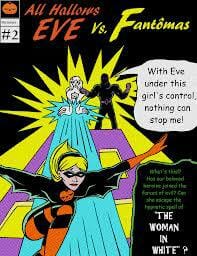 English: A poster for the first Fantomas film, Fantômas (1913) by Louis Feuillade, produced by Gaumont studios. (Photo credit: Wikipedia).
All Hallows Eve Vs. Fantomas Book II: The Woman In White

When Eve and her best friend Samantha take a young girl (the granddaughter of Professor Steiner) Trick-or-Treating, they visit a house. Well, not just any house but THE BEST  place for a Trick-or-Treater to go to on Halloween! Mrs. Calderon A.K.A. Mrs. Cauldron goes over-the-top every year for Halloween!!! When the friends get there, THEY are the ones tricked, not treated! Fantômas shows up at that house and what’s worse, the kids find out Mrs. Cauldron isn’t the real Mrs. Cauldron! The real Mrs. Cauldron is being held captive by Fantômas. The imposter hypnotized the kids so that they couldn’t open their eyes or move a muscle.  That isn’t even a surprise! The surprise is… Mrs. Calderon, A.K.A. Mrs. Cauldron, A.K.A. the Woman In White is literally Eve’s evil twin! AND, the adventure isn’t over yet!!!

The action described in the stories is exciting and the plot is also exciting and unpredictable (I never saw the evil twin sister thing coming!). I like that in book 2 of the series Mr. Eveleigh has a strong message about saying no to drugs and how bad drugs are. It is a good message for kids.  The fact that the books are pretty short and very exciting makes them great for kids who may be reluctant readers.

Five out of five book worms for the All Hallows Eve Vs. Fantômas series!