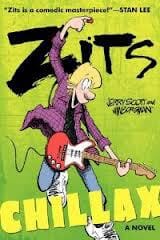 Jeremy felt helpless that his friend(Tim)’s mom got cancer. Jeremy and his friends were finally going to  get to go to an epic rock concert without any parents (the band they want to see is called Gingivitis) but Tim is donating bone marrow for his mom on that night. Jeremy and his best friends Hector, Pierce, Sara (Jeremy’s girlfriend) and Dijon (Sara’s BFF) try to figure out how to help Tim. Sara and Dijon decide to go with Tim to the hospital when he donated the marrow, Pierce shaves his head in support, Jeremy and Hector hatch a plan of their own to try to help out.

When I first got this book, I was thinking it would be a compilation (that’s my new word for today – thank you Mr. Thesaurus 🙂 ) of Zits comic strips. I love reading Zits in the newspaper! This isn’t a bunch of comics, it’s a middle grade novel! Very cool. The novel has a bunch of great black and white illustrations throughout it. I think that Mr. Scott and Mr. Borgman did a great job changing their comic strip into an MG book. I also liked that besides lots of comic strip humor, the book had a story. It tells about how Jeremy has to deal with his girlfriend and how he wants to get to the rock concert but it also has the serious part to the plot about his friend’s mom having cancer. It made the story believable for me. It is kind of like real life. I also liked that I learned more about the characters in the Zits comic than I get just reading the strip.

Before you go – I am SO excited to say that the next stop on  The Adventures of Tomato and Pea blog tour is over at Susanna Leonard Hill’s blog!!! Please check it out for an interview with me and a chance to win a copy of my book!   Plus Ms. Hill is doing a Q&A with me and commentors! So if you have a question for me ask away! I will answer them when I get home from school today! 🙂 Click HERE to go THERE!