Dan and Amy Cahill, the two kids in charge of the world’s most powerful family and keepers of The 39 Clues serum are back in an all new adventure! The 39 Clues are a list of ingredients that when you mix them together, they make a serum that makes the person who takes it 90% invincible (it happens to be very toxic, so you die soon after taking it)!

The 39 Clues is too powerful to ever to be used, but there are those who will stop at nothing to get it. After defeating the Vespers (an evil family who want t o rule the world or destroy it) in the Cahill vs Vespers series, all Dan and Amy want is to return to a normal life or at least a life where they don’t have to look over their shoulders 99% of the time and wonder who is out to get them.

Sadly, that is not going to be. J. Rutherford Pierce (a super-rich and super-powerful media guy) is out to get the Cahill kids. He is trying to ruin their reputations and even worse. The Cahills decide it is time to stop Pierce, but they soon realize their worst fears have come true.

Someone has assembled the serum, which a Cahill had just perfected (now 99.9% safe, and taken in daily doses!

Nowhere to Run by Jude Watson 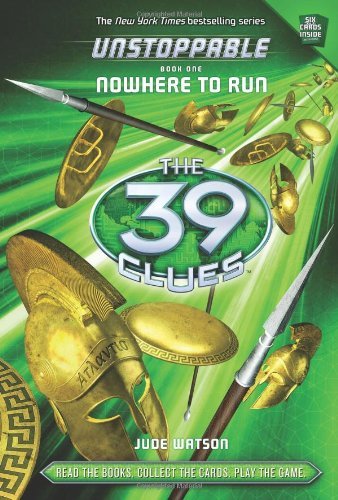 The 39 Clues is one of my favorite multi-series (I say multi because there are a bunch of series: The 39 Clues, Rapidfire: The Cahill vs Vespers etc)! I am the kid at the front of the line at the bookstore every time a new book comes out.

I was very thrilled that I was able to get an ARC of this book because of two words – Jude Watson! Ms. Watson is a favorite author of mine, and one of the original 39 Clues authors, and I think she writes really well.

I was a little disappointed in the last book of the last 39 Clues series (The 39 Clues: Cahills vs. Vespers Book 6: Day of Doom – each book in the 39 Clues series is written by different authors). In Day of Doom, there were some character things and things that happen in the plot I wasn’t really fond of.

I was hopeful that this series would start off well. I was not disappointed! Ms. Watson not only tied up things from the last series, she sets this series up to be another great Cahill adventure. Ms. Watson puts in a bunch of action, humor, and adventure into her books and tells a great story for kids.

I thought the plot of this book was especially intense and exciting because of the new bad-guy, Pierce. Pierce is very cunning, smart, and absolutely diabolical.

This is one of those books I want to give more than 5 bookworms to, but my scale only goes to 5   – 5 out of 5 bookworms! fivebooks

You can find out more about The 39 Clues and play the online game (which I think is very cool) by visiting the official 39 Clues website – click HERE!

The next book in The 39 Clues: Unstoppable series is called Breakaway by Jeff Hirsch and will be published by Scholastic Inc. on January 28, 2014! I can’t wait!