Welcome to the official blog tour for

Book II of The Celestine Chronicles,

To celebrate the release of her newest book, author Laurisa White Reyes is giving away a brand new 16 GB NOOK HD!!!

Details on how to enter the giveaway can be found at the end of this post! 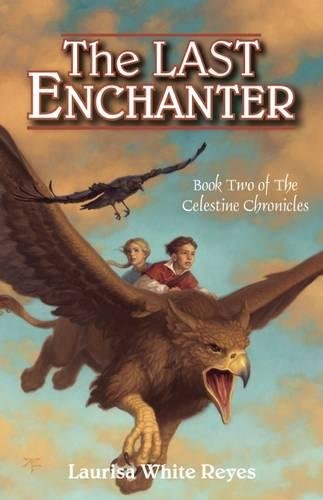 Published by: Tanglewood Press on October 15, 2013

Taken from the author’s description –

“In Book I, THE ROCK OF IVANORE, enchanter’s apprentice Marcus Frye and five other boys set out on a dangerous journey to locate the Rock of Ivanore and bring it back to their village.

In THE LAST ENCHANTER, months have passed since they succeeded in their quest. One of the boys, Kelvin, is living as royalty in Dokur, and Marcus is studying magic with Zyll. When Lord Fredric is murdered and Kelvin becomes king, the Enchanter Zyll and Marcus head for Dokur in hopes of protecting Kelvin from meeting the same fate, though it quickly becomes apparent that none of them are safe, and Marcus has had disturbing visions of Zyll’s death. With the help of his old friends Clovis and Bryn, joined by new friend Lael, a feisty girl in search of her mother, Marcus uncovers a powerful secret that will change the course of his life forever.”

The Last Enchanter (Book 2: The Celestine Chronicles) - Our Review

This book is an AWESOME sequel to book 1 in the series, the Rock of Ivanore! I enjoyed The Rock of Ivanore because it is a great Middle Grade Fantasy book with a good plot and great characters. It is great to find a fantasy book for younger kids. For as much as I liked The Rock Of Ivanore,  I enjoyed The Last Enchanter even more.  First the cover of the book is really cool. I even like the expressions on the kid’s (Marcus and Lael’s) faces. I know you aren’t supposed to judge a book by its cover but it’s really what makes you pick it up in the store. The plot was exciting and keeps you turning the pages. I liked that some of the things from the first book are explained a bit better in this book. The action was exciting and the characters are very believable. I really liked the spunky new character, Lael. She is fun to read about. There are great plot twists and things revealed that are a total surprise. At 275 pages this kid-friendly fantasy novel is great for younger kids – or even older ones who want a great story with fabulous characters.

I give The Last Enchanter five out of five bookworms!