Today is NO SCHOOL TUESDAY! Thanks to -7F (-23F with wind chill) temperatures my school is closed!

So I guess I will review a book!

This one is released TODAY! I was lucky to get an ARC of it. It is from a new(ish) series by Scholastic called Spirit Animals. It is in the format of The 39 Clues, different authors continue the story.

I love The 39 Clues and seeing where the different authors take the story. I really enjoyed the first book of the Spirit Animals series (see my review HERE).

Book 1 was by Brandon Mull (Fablehaven author) who is one of my favorite authors. The second book in the series is out today! 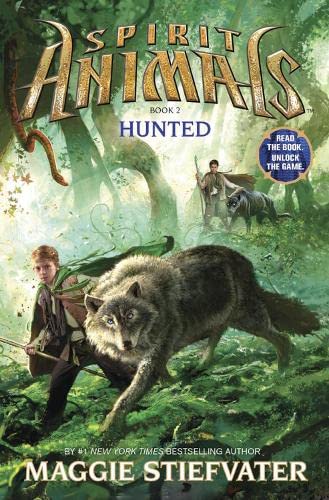 Synopsis- In book 1, four kids have come of age and are allowed to drink from the Nectar of Ninani and see if they get a Spirit Animal. Conor, Meilin, Abeke, and Rollan each summon one of the Four Fallen Great Beasts.

In Book 2, Abeke has joined the Greencloaks (the good-guys), but is still untrusted by Meilin, Conor, and Rollan. With good reason, of course – she did, at first, fight for the enemy (the Conquerors).

When they hear word of Rumfuss the Boar (a Great Beast) and his talisman (an object that could turn the tides for the Greencloaks against the Conquerors, or vice versa) being up north, the four kids and the Four Great Beasts (their spirit animals; Abeke’s, Uraza the Leopard; Meilin’s, Jhi the Panda; Conor’s, Briggan the Wolf; and Rollan’s, Essix the Falcon), along with teacher Tarik and guide Finn, plan to find Rumfuss and get the talisman peacefully. But there is a twist. There are some new enemies abroad…

This is a great second book to this series. Ms. Stiefvater really did this book very well. I like her writing style so much that I hunted (no pun intended) down her other books!

Sadly she is mostly a YA author and my parents think the books are a bit too old for me, but I am adding her books to my list of books I want to read when I am older! I love how Ms. Stiefvater goes into depth about what Jhi’s and Essix’s powers are and how they are used.

That was very cool. I like how Ms. Stiefvater kept me on the edge of my seat with lots of action and a story that was interesting and fun. I couldn’t put the book down, literally, I read this book in one afternoon.

The book also goes into depth about the Bile (A form of the Nectar of Ninani that gives the caller all of  the power) and what it does. I like Abeke. She is a great character. Conor’s cool too. Can’t wait for Book 3!

The online game is really great. I usually don’t get into online games (although I love The 39 Clues game too), but Josie and I both enjoy playing this one. You can train your spirit animal and go on missions with them.