Andy Smithson and the Blast of the Dragon’s Fury

In the first book in this series (Andy Smithson: Blast of the Dragon’s Fury, see my review HERE) we learn that an ordinary kid from our times is magically transported to the land of Oomaldee. There, Andy is asked to break a 500-year-old curse by the ghost of a past king of Oomaldee.  The curse on Oomaldee is that there is a thick fog on the land and no one can see very far and the current king can never die (he is supposed to live to see misery that he caused). To break the curse, Andy must collect hard-to-find ingredients for a recipe. 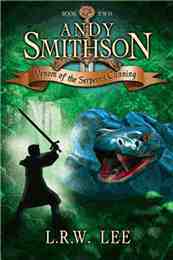 Andy Smithson and the Venom of the Serpent’s Cunning

Published by CreateSpace on January 10, 2014

In book 2, Andy Smithson: Venom of the Serpent’s Cunning, Andy is back on an all new quest. He is desperately trying to get back to Oomaldee to help King Hercalon, Mermin (the king’s closest friend, who can’t die either, and the kingdom’s wizard) and Alden (a friend of Andy’s in Oomaldee) find the rest of the ingredients for the recipe. Andy unexpectedly gets his wish while on a trip to a museum. Things in Oomaldee go from bad to worse when the magical prism keeping the king and Mermin alive is stolen. Andy and Alden decide they are going to get the prism and the next ingredient all in one shot. The only problem is an evil 7-headed dragon has both of the things they are looking for.

This series has everything a kid could want. There’s action, adventure, magic, excitement and mystery! Andy is a great main character. He is the kind of kid that I think I’d be friends with. I like how he keeps his cool and does what is right. The world of Oomaldee is described so well, I can imagine how everything looks. I especially like how the villain (the seven-headed dragon) can change shape. That made it even more terrible! Ms. Lee’s writing style keeps the reader turning pages and wanting to find out what comes next. She’s written an exciting adventure that both boys and girls will enjoy. Ms. Lee does a great job introducing the story in the second book so, the series can be read out of order. But, like most series, it’s best when read in order. No spoilers then.

Five out of five bookworms for this exciting adventure story!