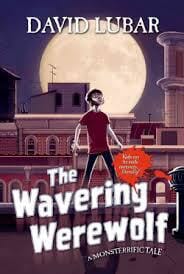 Norman was just an everyday kid. That is, until he happened to get bitten by a wolf during a school science field trip through a forest. Suddenly, Norman is getting weird wolf attributes, like his nails are growing into claw-like things, and he doesn’t need his glasses anymore. He realizes he is becoming a wolf – a WEREWOLF! Fortunately, a man on the streets gives him an amulet that can turn him back to normal. The amulet, though, will only work on a night with a full moon. But the thing is, Norman kind of likes being a werewolf. Will he choose to be plain Norman again?

I seem to be finding a lot of “monster” books (not usually the type of book I pick up) lately that I really enjoy. I thought this was a great book! It isn’t a typical “monster” book (no blood, guts or gore). It’s more about a kid’s struggle to figure out who (or what 😉 ) he wants to be. I love how Mr. Lubar writes humor into the story. He definitely knows how to keep a reader interested in his book. Norman is a cool character that the reader cares about. I like how he doesn’t realize he’s a werewolf at first – nice touch. There were a few black and white illustrations scattered throughout the book that were a nice addition to the story.