I recently had the pleasure of interviewing one of my favorite authors Matt Phelan! Mr. Phelan is an award-winning local author/illustrator who lives in Ardmore PA.

Matt Phelan is the illustrator of many books for young readers, including Flora’s Very Windy Day by Jeanne Birdsall, Xander’s Panda Party by Linda Sue Park, and The Higher Power of Lucky by Susan Patron, winner of the 2007 Newbery Medal. He is the author/illustrator of the graphic novel The Storm in the Barn, which won the 2010 Scott O’Dell Award for Historical Fiction. His second graphic novel Around the World received the 2012 Carolyn W. Field Award from the Pennsylvania Library Association and two Eisner Award nominations. His latest graphic novel, Bluffton, is about summertime, vaudeville, and the young Buster Keaton.” 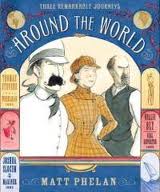 Erik: I love that you can tell so much of a story with using illustrations and few, if any, words. Do you have to re-draw some illustrations a bunch of times to get it to “say” what you want or do you pretty much know what it will look like in your head?

Mr. Phelan: I have the idea of what I want the illustration to convey in my head, but it does take several attempts to get it right. I start small, using very loose rough sketches to work out the general composition, pose, etc. Then I’ll refine the sketch until it starts to resemble the finished art.

When I draw the final version, I try to allow for a lot of “free” drawing (as opposed to copying the previous sketches). That hopefully will bring life to the final drawing.

Erik: A couple of your books are, in part, based on things that actually happened (Around the World, Bluffton). Historical fiction is one of my favorite genres.  How do you decide what to put in your books, whether fact or fiction and mix it into a great story?

Mr. Phelan: I do love history and I find it is a never-ending source of story ideas. Often the facts of the story are as good if not better than what you can make up (all of the pranks in BLUFFTON for instance were actual pranks that Buster pulled). I think of the historic facts and setting as the jumping off point. Hopefully, if you’ve done your research, everything you add to the story will “fit” in with the historical facts.

Erik: Speaking of research, I was lucky to hear you speak about your book Bluffton at the Lititz Kid Lit Festival. I enjoyed hearing about how you did research on Buster Keaton and the artist colony at Bluffton (Muskegon Michigan). What is the coolest thing you ever uncovered while doing research for your books?

Mr. Phelan: At the end of BLUFFTON, there is a photograph of Buster, his father, and a few characters from the book standing in front of Cobwebs & Rafters, the unofficial clubhouse. I spent a week in Muskegon before writing the book, just milling around and getting a sense of the place.

On my last day, I came across an estate sale (they were selling the house and everything in it). I asked if they had anything related to the actors’ colony, and the woman there showed me this original photo. Her grandfather’s in the picture, too. She sold me the photo, which is one of my prized possessions. 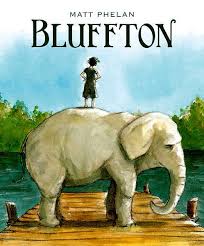 Erik: That is very cool! The subjects of your books are pretty varied. How do you stumble across great topics? Which topics interest you the most?

Mr. Phelan: I really think the ideas for my books come from people, places, or times that I’ve always been interested in. First comes my own curiosity (without any thought of turning it into a book) and only later (years later in most cases) does it bubble up into my consciousness as a Story Idea. When I first read a biography of Nellie Bly, I did it because she sounded interesting. I had no idea she would become one-third of my book AROUND THE WORLD.

Erik: Your next project has to do with Snow White and the Seven Dwarves. Can you tell us a little about it?

Mr. Phelan: I can only tell you that it’s my own retelling of the classic tale and that it is set in New York City in the year 1933. It’s going to be like a black and white movie. I’m sketching it now and having a great time.

Erik: I can’t wait to read it!

To learn more about Mr. Phelan and his books, go to MattPhelan.com.

For more on books and reading, visit ThisKidReviewsBooks.com.