LUG, DAWN OF THE ICE AGE! 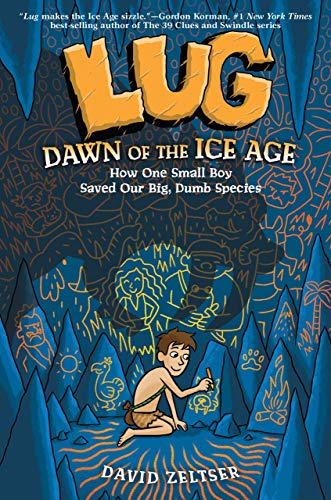 Published by: EgmontUSA on September 9, 2014

LUG, DAWN OF THE ICE AGE is the first book in a new satirical series about the world’s inaction on climate change from debut author David Zeltser.

Summary (from publisher) – In Lug’s Stone Age clan, a caveboy becomes a caveman by catching a jungle llama and riding against the rival Boar Rider clan in the Big Game. The thing is, Lug has a forbidden, secret art cave and would rather paint than smash skulls. Because Lug is different, his clan’s Big Man is out to get him, he’s got a pair of bullies on his case—oh, and the Ice Age is coming.

When Lug is banished from the clan for failing to catch a jungle llama, he’s forced to team up with Stony, a silent Neanderthal with a very expressive unibrow, and Echo, a girl from a rival clan who can talk to animals and just may be prehistory’s first vegetarian and animal rights activist. Together they face even bigger challenges—Lug discovers theIce Age is coming and he has to bring the warring clans together to save them not only from the freeze but also from a particularly unpleasant migrating pride of saber-toothed tigers. It’s no help that the elders are cavemen who can’t seem to get the concept of climate change through their thick skulls.

“My aim with Lug, Dawn of the Ice Age was to launch a gripping and funny book series that would get kids, parents and educators to enjoy focusing on climate change and the perils of ignoring it,” says Zeltser. “The impacts of global warming are devastating communities around the world. Lug is dedicated to ‘all the kids brave enough to speak up,’ andI have a ‘Giving Back’ section on my website pledging that 20% of my proceeds from Lug will go toward organizations that help such communities, with an emphasis on children and families.”

Lug, Dawn of the Ice Age - Our Review

This was a fun book to read. I like how the cavemen (and cavewomen) speak – not stereotypical caveman (example – I blogger. You blog readers.), but not perfect English either (although, I think that Lug is the closest). The idea of the story is pure genius – the Ice Age approaches, saber-toothed tigers are invading, and Lug gets banished from his tribe because he won’t bash heads with stones. Yup. Nothing wrong there. Not at all. There are pretty cool cave-art-style pictures scattered throughout the book. Mr. Zeltser has a great writing style that is chock-full of humor and the story teaches a good lesson without being “preachy.” Most of all, I love the off the wall sometimes corny humor of the book (for example, at one point in the book, Lug is talking with a banished caveman inventor, who says that he has invented some pretty useful things, like the “feather fluffer” and the “rock holder”, but he also has some useless things, like this round rock slab with a hole in the middle. Completely useless. He called it a “wheel.”). The environmental message in the book is an important one and one that gets across to the reader. Kids who like Wimpy Kid humor will love Lug. This is an awesome book! I couldn’t put it down!

DAVID ZELTSER emigrated from the Soviet Union as a child, graduated from Harvard, and has worked with all kinds of wild animals, including rhinos, owls, sharks, and ad executives. He is the author of Lug, Dawn of the Ice Age, the first book in a satirical series about the world’s inaction on climate change, for ages 8-12. He also has a forthcoming picture book, Ninja Baby, with Caldecott Honor illustrator Diane Goode (Chronicle Books). David lives with his wife and daughter in Santa Cruz, California. He performs improv comedy and loves meeting readers of all ages. His second book about Lug is scheduled to publish in Fall 2015. Visit David’s website at www.davidzeltser.com. He’s also on Twitter: @davidzeltser

“A merry prehistoric romp filled with unexpected laughs and sly humor! Following Lug as he tries to negotiate the mysteries of art, girls, changing climate, and the rowdy game of Headstone is sheer delight. Fast-paced and funny, with a heart of gold, this is one that kids will love.”—Bruce Coville, author of My Teacher Is an Alienand Jeremy Thatcher, Dragon Hatcher

Find other stops from the tour:

From the Mixed Up Files

Curling up with a good book

Hook of a Book

The Haunting of Orchid Forsythia

My Brain on Books