The Lunch Witch #1 By Deb Lucke 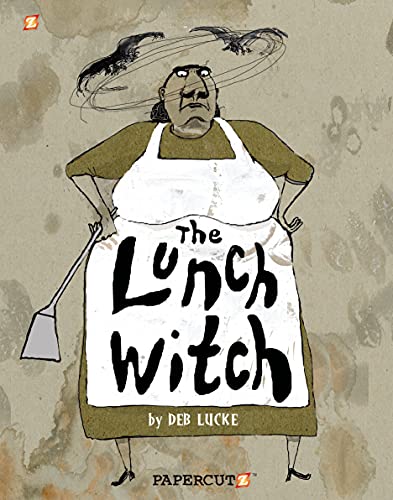 Grunhilda the Black Heart is a witch.

She is a mean witch, too. But no one really believes in magic anymore, so she needs to find a job.

After her job as a fake witch failed (she turned the boss into poop), she needed to find a new job.

Grunhilda finds an ad looking for a school lunch lady and decided to try it out. And she loves it.

The kids hate it. All was well. Well, until a girl who was going to fail the grade figures out that she’s a witch and tries to blackmail Grunhilda into using her witchcraft make her smart.

Grunhilda says no. A couple of days later Grunhilda is serving lunch and sees the girl who’s been held back, standing in line.

When the girl says that she’ll always be stupid, something resonates within Grunhilda from when she was in witch training. Can a witch have a change of heart?

The overall tone of the story is very serious (language and pictures), but there is some great humor in this one.

The humor and illustrations have an edge to them. The story is packed with “dry” humor (like the school lunch lady ad says “Good cooks need not apply”).

The illustrations have a dark-creepy feel to them. I like how the book shows the gradual change in Grunhilda from a mean witch to a nice(ish) lady.

The pages had an interesting look to them, like a kind of old-time wearing. I like how Grunhilda and the girl change each other over the course of the story.

I also like how the ending has you wondering if Grunhilda really did have a change of  heart. At 180 pages, this graphic novel has enough room to pack a great story into its pages. It looks like this will be an interesting series.