By Kekla Magoon and Ilyasah Shabazz (the daughter of Malcolm X)

Malcolm Little was 6 when his father “fell” onto the tracks and died. He was 12 when he was separated from his mother and siblings, and forced to live in a foster home.

His family who always told him he could be anything he wants is gone. At 15, he left for Boston to find a new life, and he does. He gets going with the neighborhood kids, and becomes known as Red.

He starts in on “reefer”. Then he catches a train to Harlem, and becomes known as Detroit Red (he was from Michigan).

Now Malcolm is learning how to run the “numbers” as a hustler. He was doing pretty good, but soon enough, everything spins out of control. 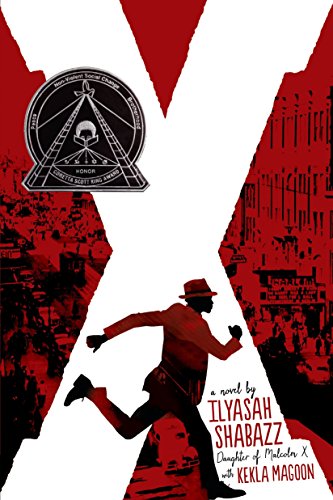 Wow. Just wow. This was an amazing fictionalized novel. I really didn’t know about Malcolm X before reading this book. This book covers his life from early childhood up to his early 20s.

The writing is compelling. It really captures the feeling of the time period. I like how it shows the way the Malcolm saw things and how he handled them.

While the book is definitely a young adult (cussing, and Malcolm drinks and does drugs (smokes marijuana), etc.), it is still a very well-done story, and is appropriate for a mature 13-14 year old, or just 15+ for reading level.

I like the parts where it shows how Malcolm Little “turned into” Malcolm X. It was a very inspiring story about a person overcoming adversity.

It was pretty cool that Ms. Shabazz is Malcolm X’s daughter, and she got information about the book by asking her father’s relatives and friends from the time “before the X”.

Realizing the book is a work of fiction, it made me want to find out more about Mr. X and his life so I read some books suggested by my history and English teachers.

While I found many of his adult teachings and views are controversial, I think any book like this one, that gets a kid to read more about the subject is great.

The overall story in this book is one of a young man trying and failing over and over, but still pulling himself together in the end. Ms. Shabazz captures the story of a young Malcolm X in a riveting story.

Bonus points for the cover art too!

I give “X: A Novel” five out of five bookworms!