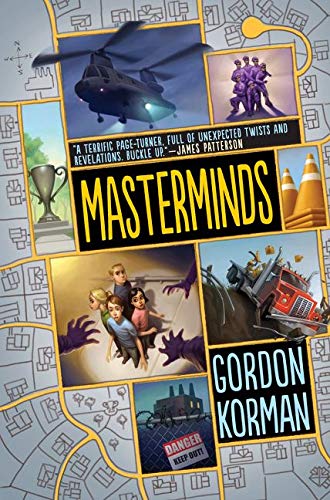 Synopsis – Eli Frieden liked his life at Serenity, New Mexico, a nice little town in the middle of nowhere. It was reported as the #1 Best Town To Live In in the world. But it isn’t until Eli’s best friend Randy suddenly leaves town with no explanation, only leaving a cryptic note, that Eli starts to suspect things.

He soon finds out, with the help of other classmates, that Serenity isn’t a charted town. Everything in it is fake. Everything they’ve been told is a lie. Even who they are.

As a science experiment over nurture-versus-nature, they took DNA from the world’s captured criminal masterminds and cloned them.

They would then raise the children in an environment devoid of evil to see if they would be nice, respectful citizens, instead of evil geniuses. Did I mention that the idea of cloning was made illegal internationally?

It’s funny, that in sheltering people from the truth, when the wall breaks down, they turn into what you hoped they wouldn’t.*

Masterminds by Gordon Korman - Our Review

What I Thought- This is an interesting book. It’s very original. The concept is cool, but kind of creepy, too. I mean, kids being cloned from modern criminal masterminds to discover the answer to nurture vs. nature, is kind of awesome, but also disturbing.

I couldn’t put this book down or get it out of my head. Mr. Korman has written a well-done story with great characters and a marvelous execution of a plan. Really looking forward to a second book!

I give this book five out of five bookworms.