The Gollywhopper Games: Friend or Foe

Published by Greenwillow Books on April 21, 2015

Synopsis- Zane loves football. When he grows up, he wants to be a professional player. All is going well, until he gets his second concussion.

Now he’s not allowed to play football for a year. At first, Zane was devastated, but when, through taking a test , he gets chosen to take place in the preliminary contest for the legendary annual Gollywhopper Games (a big, Olympic-style game for kids filled with puzzles and riddles, funded by a rich international game-seller), he isn’t sure what to believe. The prize for winning? $1,000,000. Does Zane have what it takes to win?

Friend or Foe by Jody Feldman 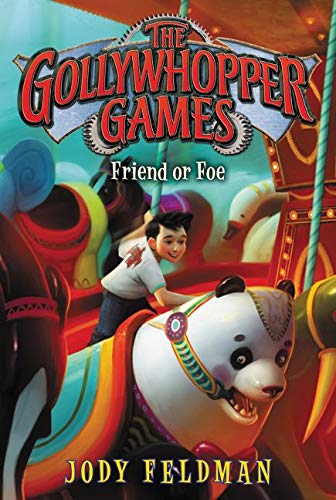 Friend or Foe by Jody Feldman - Our Review

What I Thought- You know a book is good when you start reading it, and find out halfway through the book that it is third in the series, and yet it didn’t matter really what order you read it in.

Sure, some small spoilers are said, but it doesn’t ruin the series. Each book (I think) has a different cast, as it is a different year in the Gollywhopper Games, which is cool. It’s also cool how the winners of the games can come back to help with some of the challenges.

It was a great book. I like the variety of people that got into the games. There are athletes, geniuses, jerks, etc. in the games. The challenges sound fun to do, and would be awesome if they existed in real life.