Today’s post is PACKED full of fun AND PRIZES!

One of my favorite authors whose books were the first independent readers I started reading (Bailey School Kids) has a new book coming out December 15th. It is the 13th book in her Mermaid Tales series. But before I get to that and the SUPER giveaway/poetry contest – I am going to tell you a bit about this awesome author and the 12th book in the Mermaid Tales series.

WHO IS THIS DEBBIE DADEY?!?

“Debbie Dadey used to teach first grade before becoming a school librarian.  She was never a vampire, even though her first book (with Marcia Thornton Jones) was about a vampire teacher and was called Vampires Don’t Wear Polka Dots.  Fast forward a quarter of a century and that book is celebrating twenty-five years in print and Debbie has a new book coming out called The Crook and The Crown.  It is the thirteenth book in The Mermaid Tales series from Simon and Schuster.  Debbie currently lives in Sevierville, Tennessee which is far away from the ocean, but she has heard some rumors of mermaids in the mountains!”

Ms. Dadey’s books are perfect for young readers. They are engaging, well-written and have a great message behind the stories. Like I said earlier, her Bailey School Series is one of the first series I read as I became an independent reader. They got my interest and made me want to read more. I see the same quality in her Mermaid Tales series (my little sister Josie LOVES this series). 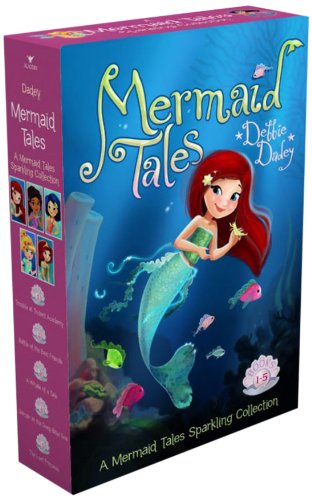 Synopsis from Goodreads- “Pearl has always dreamed of being famous: the star-studded stage, the sea flowers, the applause! So when she finds out that her third grade class is performing The Little Human, she just knows she’ll get the leading role. Especially since world-renowned merstar Angelfish Molie is judging the tryouts!

But in a shocking turn of events, Pearl’s best friend, Wanda, gets cast as the little human instead…and Pearl is stuck playing the stinky sea witch. Pearl can’t believe her best friend would steal her dream role from her.

After Pearl tries—and fails—to get Wanda to trade parts, she decides to quit the play. Are Pearl’s dreams of being a sea star doomed? And can she and Wanda patch up their friendship before it goes up in bubbles?“

Wish Upon a Starfish - Our Review

What I Thought- This was a nice book about friendship, and about how good things can come out of things that don’t go exactly as planned. Ms. Dadey has a great writing style that makes you believe that you are actually under the sea with Pearl and the others. I was laughing at the fact that the play was called The Little Human – a play that is a play on The Little Mermaid.  There is other such humor in the book that will delight kids. The illustrations are nice black&white line-type pictures spread throughout the story and add a nice touch to the text.  The reading level makes it perfect for young readers, but I think older kids will enjoy the story also. It is nice that the books are a series because you get to follow characters, but each book can be read independently without being lost. The characters are fun and kids can relate to them (even though they are mermaids/men). Don’t let The Mermaid Tales series fool you – boys will like the series too!

I give this five out of five bookworms!

The next book in the series, The Crook and the Crown, is set to release one week from today on December 15th!

To celebrate, I’m hosting a PRIZE PACK giveaway! Check out what one lucky person can win –

You can win a signed hardback copy of the Crook and the Crown, a Mermaid Tales T-Shirt, mermaid jewelry craft kit, mermaid Barbie, and a magical swimming mermaid doll! *Prizes courtesy of Debbie Dadey and my mom

This would make an AWESOME present for the upcoming holiday season! I know what you are thinking – ERIK HOW DO I ENTER TO WIN THIS AWESOME PRIZE PACK?!?!

Well I’m going to tell you –

Because in book 11 of the Mermaid Tales series, The Polar Bear Express, poetry is featured, all you need to enter is to write a Mermaid Poem in the comments below! You want an extra entry? Share this post on twitter or Facebook or some social media site and tell me you did in the comments (one extra entry per person).

That’s it – write a poem and share. All eligible entries will be added to a hat and I will randomly pick a name out on December 14th ET (contest closes at 4pm December 14th) and the winner will be announced on December 15th – the release date of The Crook and the Crown.

Here is my example:

The surface is the limit.

Waves crash on the rocks

swelling currents at the docks

I steal a glimpse of a mermaid lady

Any type of poem works! Have fun and good luck!