In the underground city of Cove, the worst insult you can call someone is an inventor.

It’s the worst of the cuss words. Trenton Coleman was shocked and mostly insulted when, after hooking up two approved devices (power generator+swing=motorized swing), and the power goes out in the city, he is blamed for it and *gasp* called an inventor.

The math didn’t add up for how the swing shut off the power, and sure enough – there had been a clog in one of the mine’s power grinders.

Only Trenton could fit in there, so he goes in, and finds… a strange device… that isn’t made from an approved metal! 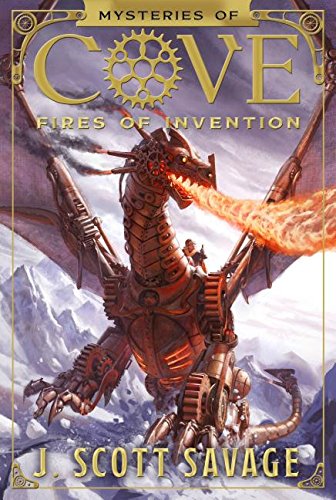 Fires of Invention by J. Scott Savage - Our Review

This is probably the best steampunk-ish/dystopian book I’ve read in a while and it’s an MG book so it will appeal to a wide range of ages.

Trenton is a great main character who you really connect with – he doesn’t mean to cause trouble (at least, not at first), he is just naturally adept at mechanics and I really enjoyed his character.

Kallista, his friend, and the daughter of a deceased inventor, is an interesting person who you want to get to know more about.

Mr. Savage has written an entertaining and engaging book (so much so I got into trouble several times for reading the book when I should have been doing something else!).

I found it really cool that at the beginning of each chapter in the heading, they show a “penciled” dragon blueprint, and with each chapter, more is completed.

I enjoyed how Mr. Savage has created a dystopian world and put the city underground. The reasoning behind it rings true and makes sense, making the plot all the more entertaining.