I am part of a virtual book tour today and I am very excited to tell you about this book because this is one that the story really stuck with me.

THE RAMPART GUARDS will be published this Friday, February 26th!

The Rampart Guards by Wendy Terrien 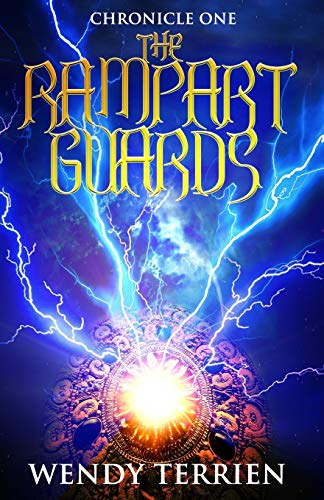 Here is the publisher’s summary

After his mom disappears, Jason Lex and his family move to a small town where he has no friends, no fun, no life. Things get worse when he’s chased  by weird flying creatures that only he can see—Jason thinks he’s losing it.

But when Jason discovers new information about his family, he’s stunned  to learn that creatures like Skyfish, Kappa, and the Mongolian Death Worm aren’t just stories on the Internet—they’re real and they live unseen  longside the human race.

Many of these creatures naturally emit energy capable of incinerating humans. An invisible shield keeps these creatures  hidden and protects the human race from their threatening force, but someone, or some thing , is trying to destroy it.

Unsure who he can trust, Jason  is drawn into the fight to save the people closest to him, and he finds help in surprising places.

Confronted with loss, uncertainty, and a devastating betrayal, Jason must make a gut-wrenching decision: Who lives, and who dies.

The series is a planned trilogy, but Ms. Terrien has an interesting concept for the next book:

The series will continue with three more books. Terrien plans to simultaneously release book two in two parts – telling different stories, but told concurrently – and will conclude the trilogy with the final chapter told from the point of view of two of her main characters.