Welcome to the Blog Tour for The Mechanical Mind of John Coggin, released yesterday!

The Mechanical Mind of John Coggin
Written by Elinor Teele 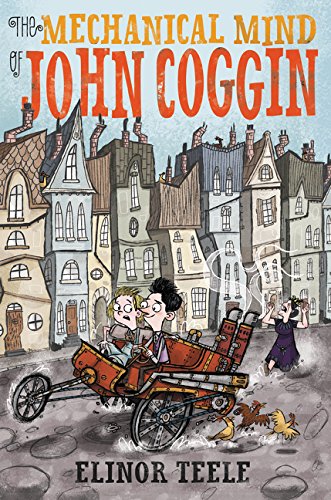 Synopsis from the Publisher- Roald Dahl meets The Penderwicks in this quirky, humorous, whimsical, and heartwarming middle grade debut about two siblings who run away from home to escape working in the family coffin business.

John Coggin is no ordinary boy. He is devising an invention that nobody has ever seen before, something that just might change the world, or at least make life a little bit better for him and his little sister, Page.

But that’s only when he can sneak a break from his loathsome job—building coffins for the family business under the beady gaze of his cruel Great-Aunt Beauregard.

When Great-Aunt Beauregard informs John that she’s going to make him a permanent partner in Coggin Family Coffins—and train Page to be an undertaker—John and Page hit the road.

Before long, they’ve fallen in with a host of colorful characters, all of whom, like John and Page, are in search of a place they can call home. But home isn’t something you find so much as something you fight for, and John soon realizes that he and Page are in for the fight of their lives.

But still, John has to drop out of school and learn the family business – making top-notch coffins. Life becomes rather dreary, as can be expected with such circumstances. It most certainly doesn’t help that John has an overactive inventive mind.

When he and his sister encounter a short man named Boz, at first they aren’t sure what to think. But then they decide to go with him to the circus, and become acrobats – after all, Great-Aunt Beauregard is trying to force John into signing a contract that makes him and his sister work in the Coggin family business; even though they both don’t want to. And so begins John’s biggest adventure yet!

The Mechanical Mind of John Coggin by Elinor Teele - Our Review

What I Thought- This was a rather interesting book. I want to say it takes place around the early 1900’s-ish, but it’s somewhat confusing. What’s even more confusing is that it is a good type of confusing – it gives the impression that the book could happen anywhere, and maybe even anytime.

That was a nice touch. It is thrilling seeing John’s character develop from a cowardly wimp who is afraid of speaking up for himself into a strong, confident boy with an ingenuitive mind and a powerful voice.

The characters he and Page encounter are wacky and loveable. There are illustrations throughout the book as well. I really enjoyed Ms. Teele’s narrative, and her distinct voice, as I read the book – I finished it in a short amount of time – not that it was “easy” but I found the words and story flowed.

I give this book five out of five bookworms.fivebooks