Hi everyone! Today on Creative Kid Thursday, I am spotlighting kid author Tanner Walling, author of Fury of the Storm.

Tanner was nice enough to write a guest post, so I’m going to stop talking/typing and hand the mic/blog-space over to Tanner.

Take it away, Tanner!

Hey everyone! My name is Tanner Walling and I am a teen author and science writer.

Erik asked me to do a guest post about myself, my books, and what I want to do in the future and I gladly accepted. So, here’s the post! Here’s a little about myself.

Outside of writing, publishing, and that kind of stuff, I maintain my science website, Science All Around, where I create articles and videos explaining science in an easy-to- understand way, since most science websites don’t do that.

I’ve been writing for Science All Around for over three years. I also row for my school’s crew team, am a member of my school’s Model UN team, and enjoy traveling with my family.

Now, to the meat of the post: BOOKS! I write action adventure novels for middle-school (ages 10-14) and young adult readers.

The general theme in my books is action adventure that often has a survival element to it. Think Roland Smith and Gary Paulsen with a bit of James Dashner thrown in the mix.

My books are also very-action packed, which my readers seem to really enjoy. The current series I’m writing is my Fury of the Storm series, which is a disaster survival series featuring Isaac Tohver, a fourteen year old who, in each book, fights to survive the largest disasters nature can throw at him.

Here’s the description of the first book in the series, Fury of the Storm:

Fury of the Storm by Tanner Walling 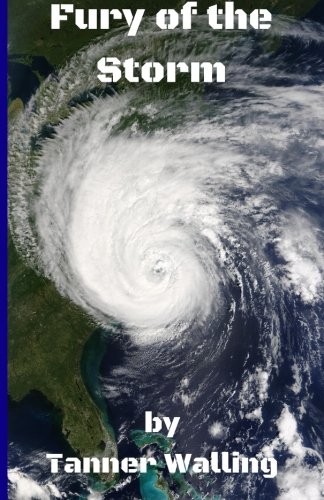 A Category 6 hurricane of massive proportions.
One private jet carrying two teens and their pilot.
They weather the plane crash.
But now they must survive.

After Isaac’s plane is torn to shreds in a grisly crash that he’ll never forget, he’s faced with the disastrous realization that his plane has crashed over a mile from the shore and the only link from them to the mainland is a string of small islands so small the waves threaten to spill over and drown them beneath their dark crests.

Fury of the Storm was the first book I ever wrote. I started it back when I was eleven, but really didn’t write it until I was twelve.

Then, it went through editing and was published about a year later, in February 2016. The second book, tentatively titled Foreshock, is being edited, the third book is currently being written, and the fourth book is in the planning stages.

For the future outside of writing, I plan to go into a science or technology field for a career.

If you have questions about writing, publishing, or anything like that, I’d be glad to answer them.

You can find me online through the links below. Thanks to all of you for reading! I especially want to thank Erik for offering me the guest post!

Thank you Tanner for stopping by and writing this post!