Delaney Delgado isn’t the biggest fan of God. After all, if there was a God, why would he have let her sister die?

It’s just easier to think that He doesn’t exist then to think he has a vendetta against her family.

When she buys a piece of cheese-a Babybel cheese wheel!-appears at a convenience store, she thinks nothing of it. Until the Baby Jesus is revealed underneath the wrapping.

Suddenly her town is full of “miracles” and hopeful tourists. Delaney is sure the miracles are fake, even as more and more keep appearing.

Enlisting her best friend, she sets out to prove them wrong.

But can she handle the truth?

Cheesus Was Here by J.C. Davis 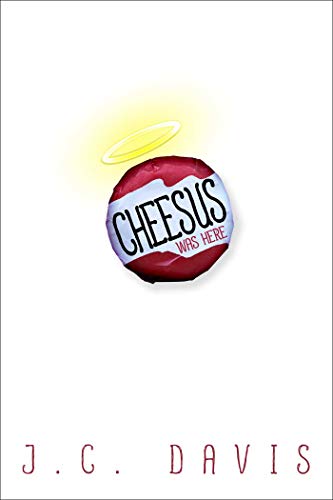 Cheesus Was Here by J.C. Davis- Our Review

This was a really good book – I like how Davis has made it so it isn’t really in favor of or against religion – just a town that is receiving “miracles” and a girl trying to disprove it with a friend that hopes to prove it.

The book is rather true to teenage life. The dialogue is spot on even with a bit of cuss words but it isn’t overly done. Davis has created a small town that is full of mostly religious citizens and adds the contrast of a character that has given up on God.

I was drawn to the quirky story line with the deeper human story behind it. Davis balances heartbreak wonderfully with humor to make the story incredibly emotionally full.

When first cracking it open, I thought I was going to love it, but was immediately put off by the atheistic main character.

After delving into the book further I found that Delaney’s perspective allowed me to look introspectively at my own beliefs.

I grew to appreciate the story more than if I had never disliked the character initially. Weird, I know; but true.

This was a very good book, thought provoking book. I would like to read more from Davis in the future.