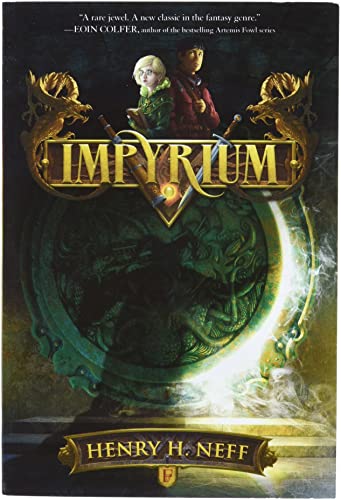 Published by: HarperCollins on October 4, 2016

“For over three thousand years, the Faeregine dynasty has ruled Impyrium. But the family’s magic has been fading, and with it their power over the empire.

Whether it’s treachery from a rival house, the demon Lirlanders, or rebel forces, many believe the Faeregines are ripe to fall.

Hazel, the youngest member of the royal family, is happy to leave ruling to her sisters so that she can study her magic.

But the empress has other plans for her granddaughter, dark and dangerous plans to exploit Hazel’s talents and rekindle the Faeregine mystique.

Hob, a commoner from the remote provinces, has been sent to the city to serve the Faeregines—and to spy on them.

One wants to protect the dynasty. The other wants to destroy it. But when Hazel and Hob form an improbable friendship, their bond may save the realm as they know it…or end it for good.”

I was absolutely blown away by this entire book – everything from the building of the setting to the development of the plot. The world is very interesting – the story behind it was that it was our world, and magicians practiced in secret.

However, an evil demon decided to conquer the world, and was only stopped by three extraordinarily powerful magicians. That event was called the Cataclysm, and it completely rearranged the world as we know it.

One of the powerful magicians established a dynasty to bring order, and she and her daughters ruled for centuries. This is where we pick up the story, with the 42nd empress aging and wishing to pick her heir, her kingdom divided into two castes – magic users and non-users.

Hazel is the empress’ granddaughter who doesn’t want to rule. Hob is part of the oppressed laypeople and wants them to be treated as the magic users are.

Their chemistry is absolutely phenomenal. Neff’s writing style builds captivation amongst the readers, drawing them on as the story becomes both more convoluted and clearer by the minute.

There are touches of mystery and intrigue, and I liked how the story was told from both Hob and Hazel’s point of view, which serves to create tension through the reader knowing more about the major differences of the two characters.

It was interesting how magic was defined, where there is some innate skill level on the part of the spellcaster, but it also depends on their training, willpower, and concentration – which inadequacy in any of these can lead to consumption of the user when attempting a difficult spell.

It was a neat, simple concept.

I really enjoyed reading this fantasy novel, and I cannot wait to read any more books from Neff. I was also reading the acknowledgments, and it seems that this book is a follow-up to Neff’s previous series, The Tapestry,” in which the magical world is set up, where the plot is the prehistory of this book.

This is fascinating because Neff took a world he created, and then imagined how it could transform as the centuries go past.

I will definitely be checking out the Tapestry books, and I highly recommend fantasy fans to check out this book!