Synopsis from Publisher- “John David Anderson, author of Sidekicked and The Dungeoneers, returns with a funny, heartwarming, and heartbreaking contemporary story about three boys, one teacher, and a day none of them will ever forget.

The ones you’ll never remember, and the ones you want to forget. Ms. Bixby is none of these. She’s the sort of teacher who makes you feel like school is somehow worthwhile. Who recognizes something in you that sometimes you don’t even see in yourself. Who you never want to disappoint. What Ms. Bixby is, is one of a kind.

Topher, Brand, and Steve know this better than anyone. And so when Ms. Bixby unexpectedly announces that she won’t be able to finish the school year, they come up with a risky plan—more of a quest, really—to give Ms. Bixby the last day she deserves. Through the three very different stories they tell, we begin to understand what Ms. Bixby means to each of them—and what the three of them mean to each other.” 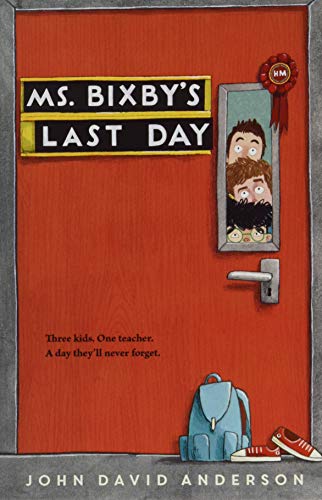 What I Thought- This was an interesting take for a new genre from Mr. Anderson – he normally writes in a fantasy/superhero genre, not a realistic fiction. AND… this book was pretty darn good.

I honestly didn’t know what to expect, I agreed to read it because I liked Mr. Anderson’s other books. I am glad I did so. Mr. Anderson gets into the minds of the three main characters, and he makes them extremely life-like, so much that you believe that they could exist.

They act like normal elementary school boys, and that made the book so much more enjoyable. The story is actually quite sad and reserved, but it also has a way of making you feel good about yourself at the same time.

Mr. Anderson has written a marvelous foray into realistic fiction, and I recommend it to anyone looking for a good read.
I give this five out of five bookworms!fivebooks

WHO IS THIS JOHN DAVID ANDERSON???

Bio: John David Anderson is the author of many books for young readers, including Sidekicked (See my review HERE) and The Dungeoneers (See my review HERE). A dedicated root beer connoisseur and chocolate fiend, he lives with his wife, two kids, and perpetually whiny cat in Indianapolis, Indiana. You can visit him online at http://www.johndavidanderson.org.
Links:

There is an excerpt that you can read from the novel HERE.
You can also see a video featuring the book HERE.
MS. BIXBY’S LAST DAY BLOG TOUR LIST