Many middle grade readers know Jude Watson from the 39 Clues books she’s written. I am a HUGE fan of the many Star Wars books she’s authored too.

Ms. Watson has a distinctive writing style and is one of my favorite MG authors. When I saw she was writing a new MG book, I had to get my hands on it!

Today is the release day for the new book! WOO!

Loot: How to Steal A Fortune
By Jude Watson 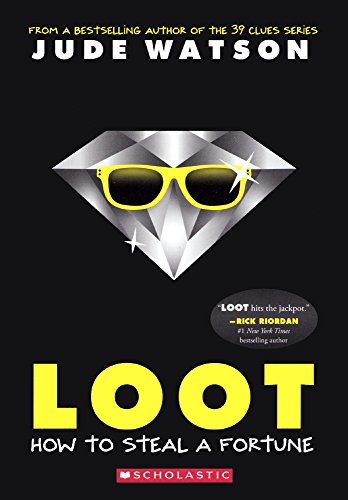 March McQuin was shocked. Right before his eyes, his own father had fallen off a roof, and was dying. Of course, some would say the man deserved it, as his dad was Alfie McQuin, infamous burglar, and March was his lesser known partner-in-crime. His dad handed him a strange stone, and gave him these final words – “Find jewels”.

When March is at the airport being sent to an orphanage (his mother had passed away when he was young), he meets Jules McQuin (his long-lost sister that he didn’t know he had) who was going to the orphanage with him. They soon realize that the orphanage is not much better than a prison. At the orphanage they meet Darius and Izzy, who also hate the place, and they all break out.

March realizes the stone his dad gave him as he was dying is much more than it seems and the jewels he told him to find was really Jules his sister. Soon the gang of kids find themselves not only evading the juvenile authorities but also going on a crime spree to “recover” more of the strange stones.

The original owner (the one who March’s dad stole the stones from) offered the kids 7 million dollars for the return of all the stones. Sounds simple? Not really. The kids have to compete with an old associate of Alfie’s, a detective turned TV Show-Host, and time. The McQuins and friends have their work cut out for them.

Loot: How to Steal A Fortune - Our Review

This. Was. An. AWESOME BOOK!!! Ms. Watson has written an amazing, thrilling, and completely action-packed book that kept me on the edge of my seat at all times. Gordon Korman (on the back of the book) wrote that is has “more twists than a pretzel factory” and he is totally right – in a good way!

Ms. Watson has a way of drawing you in, and not letting you go until that final period. Just when I thought I had things figured out, the story took another turn. I loved that I never really knew who to trust in the plot.

March is a great character and not even a bad guy (for the son of a thief). He hurts no one, and makes theft an art- form. The book is appropriate for all ages but the scene where Alfie dies may be a bit much for some young kids (nothing too graphic). The first ten pages of the story had me wondering.

They were a bit slower than I am used to with Ms. Watson’s books, but then **BAM** she grabs you by the nose and doesn’t let it out of the book until the end. After I got done reading the book, I realized how much of the story was set up in those first ten pages. Ms. Watson is a masterful author.

I give this book 5 out of 5 bookworms!