A sinister Problem has occurred in London: all nature of ghosts, haunts, spirits, and specters are appearing throughout the city, and they aren’t exactly friendly.

Only young people have the psychic abilities required to see—and eradicate—these supernatural foes. Many different Psychic Detection Agencies have cropped up to handle the dangerous work, and they are in fierce competition for business.

Jonathan Stroud, author of the internationally best-selling Bartimaeus books, continues his hit series of supernatural thrillers about three teen members of a Psychic Detection Agency who are battling an epidemic of ghosts in London.

The fourth book in the series, The Creeping Shadows, released September 13th.

WHO IS THIS JONATHAN STROUD??? Jonathan Stroud (www.jonathanstroud.com) is the author of three previous books in the Lockwood & Co. series as well as the New York Times best-selling Bartimaeus books, and the stand-alone titles Heroes of the Valley, The Leap, The Last Siege, and Buried Fire.

He lives in England with his wife and three children.

Creep on over to LockwoodandCo.com. 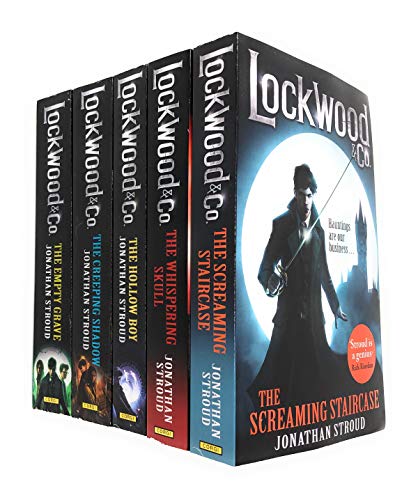 I am by no means a fan of scary horror books. I really have a distaste for monster books (with a few exceptions). I would not classify these books in these groups.

These books are creepy paranormal meets Sherlock Holmes. I like creepy. Stroud’s writing and story-telling abilities shine through in each book. Want to see what I mean? Click HERE to read an excerpt from the newest book – CREEPING SHADOW.

I love the dystopian setting in the books. It is a clash of modern London with a hint of Holmes and a big ghost problem. Stroud pulls the reader into this world with ease and before you know it, you are completely submersed in the plot.

The characters are memorable with a favorite being Lucy, who tells the story from her point of view. Each book in the series, including Creeping Shadow, can be read individually, but I urge you not to cheat yourself out of the series.

AND HERE IS YOUR CHANCE TO WIN THE ENTIRE SET!!!