SUMMARY- Seventh-grader Charlie Gaines was an everyday kid who loved football. Charlie also happened to be a whiz at fantasy football. Charlie’s best friend, Anna happens to be the granddaughter of the owner of a local NFL Football team (a team that isn’t doing really well and is pretty much a laughing-stock).

Charlie makes a draft suggestion to Anna’s granddad and Charlie is surprised when her granddad takes him seriously. Soon, the football team starts doing better with Charlie’s suggestions but Charlie isn’t very comfortable with his new-found fame after the media gets wind of what’s been going on.

As Charlie learns to cope with the good (and the bad!) of being locally famous, he soon learns things don’t always go the way you plan. Now Charlie is being targeted by the media and it also doesn’t help that his best friend is getting slightly peeved with him… 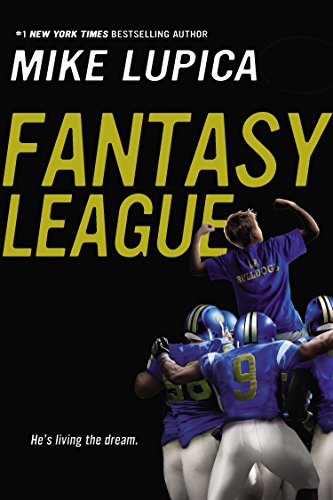 WHAT I THOUGHT- I will be the first to admit, I am not a huge football fan (give me ice hockey and baseball!) and I wasn’t real excited about reviewing this book.

After reading the book, I will admit Mr. Lupica has written a football story that I thoroughly enjoyed. I hung on every word, the story was that good.

The book had a ton of football facts and strategies but I really enjoyed reading all of it because it was mixed into such a great story line. The book isn’t just about football. It is more a story about being true to yourself, and making the most of the moment.

It was about making new friends, and having fun with the old ones. It was very realistic and felt like a story that could happen to anyone. All the characters were excellent and each one had their own story behind them.

I also liked the fact that Charlie’s best friend is a girl, but he doesn’t see her in any romantic ways – just someone who loves football the same amount that he does. Anna is a great character and it shows that she is as much an expert on football as Charlie. Mr. Lupica has written a wonderful story about so much more than football.

I give this book five out of five bookworms!fivebooks

To learn more about Mr. Lupica and his other books, please visit his website by clicking HERE