Synopsis- Jax Aubrey hated his eighteen-year-old ignorant guardian, Riley Pendare, and the town that he now lived in. He started living with Riley after Jax’s dad died (his mom died years before).

Jax wished he could leave the stupid town and everyone in it forever. But when Jax wakes up one morning, and nobody is in town, not a single soul, he panics. This wasn’t what he meant! Where was everyone?

But, the next day, everyone was back, and nobody knew that anything weird happened. Then, next week, it happened again. Jax soon learns there is an eighth day of the week in a different time-frame, and only certain people can traverse between the two. Jax live in both the normal 7 days and in the 8th day.

Other people only lived on the eighth day. As it turns out, Jax, along with his not-so-clueless guardian, Riley, are protectors of one of the 8th day people, Evangeline.

Evangeline is hiding from evil men (who also live in the eighth day) that want to get rid of the normal days and everyone in them, and replace it with only the eighth day. Jax’s days just got a lot more complicated! 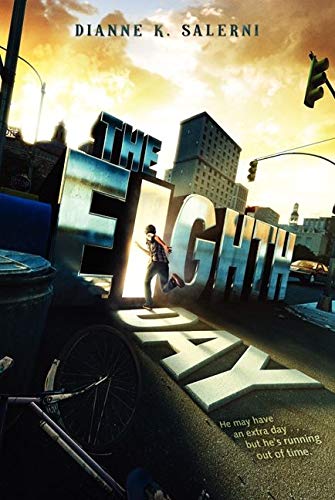 The Eighth Day by Dianne K. Salerni - Our Review

What I Liked- This is one of those wild, crazy-good books that make you feel like you got off an awesome roller coaster when you get done with it. Ms. Salerni has written a one-of-a-kind exciting, and fun adventure book.

The best part is that the writing is so well done that the story hangs together well and everything clicks. There is a cool setting that makes you feel like you are there with Jax. The idea of the eighth day is a creepy, yet cool, phenomenon.

I really liked connecting the dots in the story to figure out who was who. Jax is a realistic, normal tween whom you can relate to. Riley, his guardian, ends up being pretty cool, too. I sincerely hope that there is a sequel!